Would Persecution Help The American Church?


Published a year ago, thought I would re-post as I have other projects I’m working…

Imagine that the President of the United States proclaimed he will end Christianity in America. That he has the full support of Congress and The Supreme Court.

That laws were quickly passed against sharing the gospel. That possessing a Bible is a crime.

Imagine that hundreds of Christians are jailed, facing life in prison or death. That you could be arrested for going to church.

I know it seems far-fetched that this could happen in America, the land of the free. The land of Religious Liberty! But imagine that it did.

Would it destroy Christianity in this country or increase it? Would the fear of imprisonment or death drive people away from the Faith or to it? 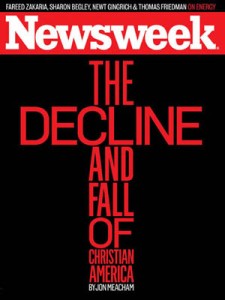 It has long been reported that in the United States, Christianity is in decline.

According to the American Religious Identification Survey (ARIS), Christians had dropped 10% in number from 1990 to 2009. Self-proclaimed Christians dropped from 86% to 76% of the population in just two decades.

What the American church enjoys…

We live in the freest country with regards to religious liberty this world has ever seen. Our laws and heritage are based on Christian principles. Christian church buildings number in the hundreds of thousands throughout the nation.

Our Creeds and our Currency proclaim that we are a nation under God and one who trusts in Him.

Yet our current President has stated our country is not Christian. His Party narrowly defeated eliminating God from its platform in 2012. Atheists and non Christian groups consistently fight public displays of prayer and Christianity–often winning. Unrighteous institutions such as Planned Parenthood have the support of the Government while the Gospel is often considered hate speech.

It appears that America is moving farther and farther away from its Christian principles.

In 2005, President Mahmoud Ahmadinejad did boast that he would eliminate Christianity from Iran. He had the full support of The Ayatollah Khomeini, The Republican Guard and the Judiciary. The law supported his platform. Muslims converting to Christianity are guilty of apostasy, punishable by death or life in prison.

Ahmadinejad did more than boast—he acted. During his presidency, hundreds of Christians were arrested, some killed. There was indeed a political effort to stop Christianity. But what effect did it have?

Mark Bradley tells a story that might give us a hint…

In early 2011 the wife of a Christian prisoner was called to report to the offices of the MOIS (Ministry of Intelligence and Security2) in Tehran… During the interrogation the wife of the Christian prisoner was asked if she knew why her husband was in prison. She replied, “Because of his Christian faith.” She was surprised by her interrogator’s response. “Of course not…If we arrested people for religious reasons, there would be no room in the prisons.”~Too Many To Jail, Mark Bradley

In Iran persecution did not stop Christianity. Fueled by House Churches (small groups meeting in homes), Iran’s Christian growth is unprecedented in the Missile East.

Iran has no church infrastructure, a government hostile to its message and isolation from much outside support.

But it’s growth is exponential. In spite of its obstacles, it is the fastest growing Christian Church in the world!

In Communist China, Christianity is exploding. By some estimates, in a generation China will have more Christians than any other country. More than Mexico, more than Argentina and more than the United States. This is amazing considering the persecution this church has suffered since 1949.

After gaining power, Mao Zedong expelled 10,000 missionaries from China. He did not want any foreign influences in his country. Two subsequent policies promoted catastrophic persecution for the church. The `Great Leap Forward’ in 1958 and the `Great Proletarian Cultural Revolution’ in 1966 ushered in the execution and imprisonment of many Christians.

This period started an underground house church movement that flourished in these hard times.

After Mao’s death in 1978, the church has suffered less persecution and more visible growth. Many warn of a revived government crackdown on Christianity, but Chinese Christians are standing up and protecting their faith.

Another amazing fact about Christian growth is that it comes almost exclusively from conversion. Chinese parents are only allowed to have one child.

What then can we conclude from these growing Christian churches suffering persecution? What do they enjoy that the American church does not?

When Christians are persecuted two things happen. First, persecution causes those that are not truly committed to Christ to leave. If it is not something they truly believe in, why should they die for it? Second, it causes those true, committed believers to come together and be unified. And when true, committed believers are unified under the name of Jesus and empowered by the Holy Spirit, growth is natural.~The Timothy Initiative

So then is persecution necessary for church growth? If persecution initiates stronger commitment and unity within the church, how can the American Church initiate the same?

A Church of hope

Persecuted churches provide hope for their congregation. Where the government has failed them, the church has not. Under trying times these churches have provided refuge, love and hope. They have provided a place that is pleasing to people and pleasing to God.

American churches need to distribute the same. It’s not about the building, it’s about the body. America has far too many beautiful structures that do not fill their seats or their role. They are more concerned about their tax-exempt-status than their purpose in the community–and the community has sought hope elsewhere.

I am fortunate that I live in America, but more fortunate that I belong to a growing, bible-believing Church. That’s the good news. The bad news is that it took my wife and I a while to find it.

I say I’m fortunate because I have been to churches where it was not that enjoyable. People seemed to be there not out of joy but of obligation. Greeters were not really greeting, just manning their post. Nursery workers seemed miserable and the congregation as a whole seemed wanting to be elsewhere.

They were not glad at the idea of going to church–they were sad–some were even mad. It was a time and a place to be occupied. There seemed to be no purpose for  being there. That’s not what church is to be. It’s to be exciting and joyful. It’s to be fulfilling and a place of purpose.

I have been told that when one comes into our church, they feel welcome, they feel uplifted and they feel hope. 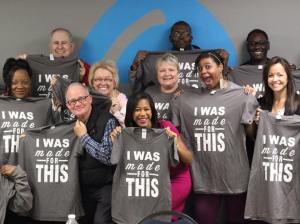 It’s because the church has found its place within the community. It is a refuge for the brokenhearted because members are positioned in purpose. They are glad to be therebecause they contribute according to their talents.

And within this we find increase.

Commitment and unity combined with the Holy Spirit is the formula for growth, with or without persecution.

In the house-church formula of Iran and China, purpose is found in smaller congregations. Forced into small intimate groups, the churches find a trust and unity impossible to be found in larger congregations.

They are cohesive in their efforts of evangelism and experience massive growth. Adding more small groups with more people involved–the church grows.

Of  700 members we have over 40 small groups meeting every week. We have men’s groups and women’s groups. We have marriage related groups and youth groups. Bible studies and fellowship groups such as golf and cycling.

Here Christians get where the rubber meets the road in growing spiritually. It shows with Spiritual growth in the individual member. It shows with added numbers on Sunday.

Acts 2:46 every day they continued to meet together in the temple courts. They broke bread in their homes and ate together with glad and sincere Hearts. 47 praising God and enjoying the favor of all the people. And the Lord added to their number daily those who were being saved.

We don’t need persecution for growth, we need unity, commitment, and dependence on the Spirit of God. It’s time our churches in America focus on that process.